When I was a teenager I was all about boys in bands. And I don't mean to say that I was a giggly groupie. I mean, the idea of women in music, just kind of turned me off. Of course, Britney Spears didn't count, she was a pop singer. But when I starting really digging rock music in my teens the idea of woman "frontmen" or a woman guitarist, just didn't sit right with me. I can't even begin to explain why (because I can't figure it out myself) and to be honest, I am now kind of embarrassed at my women-in-music-hating ways.


Especially since that now, the CD detritus littering the floor of my car consists almost exclusively of women artists. Rockers, cool chicks, riot grrrrls. It's only now in my 20's that I'm realizing how awesome it is for women to not have to shake their bon-bons and sing through autotune to be bitchin' rock stars. In fact, there's lots of times where Charles would introduce me to a new band and my only complaint is, "this is too manly...I like girl bands".


A lot of the times in music, I find that having a girl in your band can look sort of gimmicky. "We choose the girl!" (I think for every situation in life there is a Mean Girls quote that fits accordingly) When you have a band totally employed by boys, then a girl holding rain stick standing next to the lead singer looking all tortured and trendy, it's clear that she is only there to get your band some buzz. I think it was that sort of thing that led me to believe that girls just didn't have a proper place in rock music when I was a teen.


But now it seems that women are all I want to listen to. I draw such inspiration from these ladies who have totally changed my perspective on female alternative music. Sure back in the day there was Alanis and all those Lilith Fair chicks, but to be honest they never really resonated with me the way the likes of Neko Case, Cat Power and Lissie do. It must be an age thing.


In my mind, music, fashion and style go hand in hand in hand. And what I like about these artists is that they don't appear to be fabricated by a team of stylists behind them. They make their own choices with their music, and even more so with what they wear. And what's great is that they all have such good taste. It shines through in their music, and also in their enviable style.


In my teens I dressed like a boy, trying to emulate the male rockers that I idolized, the Bert McCrackens and the Davey Havoks, but now I'm gathering style inspiration from these seriously cool female musicians who continue to blow my mind with their talent. Each one of them (though their style style as well as music style is very different) represents something I see in myself, or want to see in myself. Whether it be Florence's whimsical goddess aura, or Lissie's casual cool, on any given day I can identify with them and their way of expressing themselves through music and fashion. 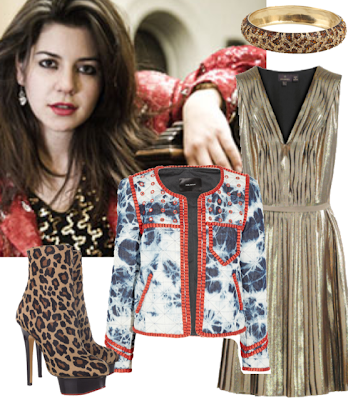 Marina of Marina and the Diamonds totally rocks the whole, electrified cheerleader look. She is always rock'n'roll and always mixing and matching, but it always feel right, never contrived, just like her music. Charles once described her as a hardcore Kelly Clarkson. LOL 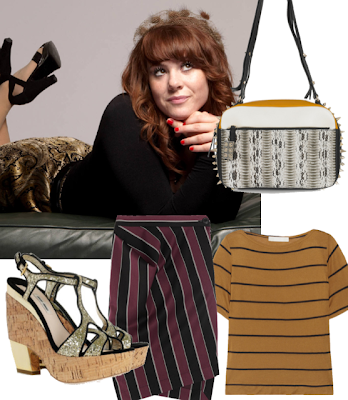 Kate Nash is a 50's punk, feminist goddess. Her outfits are just as clever as her lyrics. She's also living proof that you can be a feminist and totally fabulous and fashionable at the same time, contrary to what most people will have you believe.

In a post-Spice Girls world, where if you were a strong woman and liked to sing you immediately were lumped in with the Christinas and Shakiras, I find it so refreshing that even as a 20-some-odd girl, I can get inspiration from these women who not only make amazing music and have great style, but are also intelligent people as well. GIRL POWER! :)