I'm finding out lately that being interested in fashion isn't enough. While I will always love clothes, fashion and art, I'm figuring out that I'm more than just a fashion-head.

One of the things that has led me to realize that there's more to the world than shoes and bags and clothes was reading a book for my journalism class. It couldn't be farther from the books I usually read. It didn't involve Grace Coddington driving to the Hamptons with a car full of cats and it had nothing to do with being a shopaholic with a credit card problem and a sexy boss who the heroine always embarrasses herself in front of.

It was the farthest thing possible from those things and I really enjoyed reading the entire thing. I wanted to share with you guys my little review for The Tiger: A Story of Vengence and Survival, by John Vaillant. 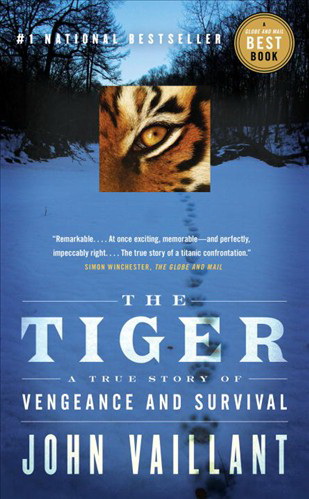 The often-forgotten Russian Far East is the setting of this devastatingly interesting book by John Vaillant. The Tiger takes us to the area of Primorye, where people live on the edge of civilization and poaching isn’t just a sad effect of greed, it’s a way of life.

The boreal forest or Taiga becomes the most important character in the book, of which all of the other characters are just merely background to the massive presence that the forest has in the minds of the locals.

But as fabled and revered as the Taiga may be in Russia, it doesn’t compare to the veneration of the Amur tiger.

An endangered species that locals both fear and admire, the Amur tiger has almost mythical status in the Taiga, and most hunters know that if you cross a tiger, it will never forget.

The Tiger centres around Yuri Trush, an ex-military enforcer with Inspection Tiger, a now-defunct organization that worked in the Taiga to crack down on poaching.

But in post-perestoika Russia, times are tough. Many in Primorye need to poach to survive.

The story weaves in an out between the history of the area and it’s ties with tigers and focuses on an instance where a tiger turned against man and went on a rampage of odd behavior that included hunting and killing the poachers that once hunted him.

Parts of the book focus on Trush and his team hunting the man-eating tiger, while going back and forth between historical anecdotes and a narrative that gives the reader a look into the mind of a tiger out for revenge.

Filled with chilling facts that cause the reader to look for any excuse to bring up tigers in subsequent conversations; this is non-fiction at it’s finest. The interesting subject matter combined with Vaillant’s colourful and descriptive writing style leave the reader wanting more at the end of each chapter.

While the non-linear narrative can be confusing at times, this book weaves seamlessly between generations and gives the reader a thorough understanding of one of the most misunderstood areas (and animals) in the world.

If this isn't enough to totally get you hooked on learning about Russia and Tigers, then you won't mind me telling you that in 2014 this book is going to be adapted into a movie starring...(wait for it)...Brad Pitt!

I think it's really important to broaden your horizons, and even though I tout myself as being totally obsessed with fashion, I'm obsessed with other things too....like tigers.