So the past few weeks I've been getting these emails. It's not totally abnormal for me to sign up for some website, forget about it then complain when I receive emails that I actually signed up for to begin with.

But every day for the past few weeks I have been getting an email from a company called M'Oda 'Operandi. At first I would just spam spam spam and delete delete delete. But the other day I decided to open the email and what I found, opened my eyes and changed my life forever. (That may be a small exaggeration...)

Basically what this site does is take the same method for buying luxury cars and applies it to buying luxury clothes. If you know me, then you know that luxury clothes is not only something I drool over during the day, but also dream about at night. ("So I had this dream that I got the new moto-cross pants by Rag and Bone, except they weren't that electric blue colour, they were like, taupe or something...I think I like the blue better." Like I had any say in what colour those pants are...)

For those of us who don't buy luxury cars on a regular basis, (cut to my red '05 Ford Focus) the concept is, that you pay for half the item a full season before it comes out and then once the item is released, you pay the remainder and the car gets delivered to you.

M'Oda 'Operandi seems to have read my mind and created a website where you pay 50 per cent down on clothing right off the runway. (So in Fall you would be paying half for Spring items and vice versa.) Once the item is made by the designer, you pay the other 50 per cent and M'Oda 'Operandi ships the items to you.

HOW. BRILLIANT. DOES. THIS. SOUND.

If had lots of money, (which I don't) it would be so worthwhile to shop for designer clothes strictly by this means. Think about it, you're guaranteeing yourself designer pieces right when they come out. And being able to make a down payment gives you time to save your money and not feel like you're taking such a hit in the wallet. 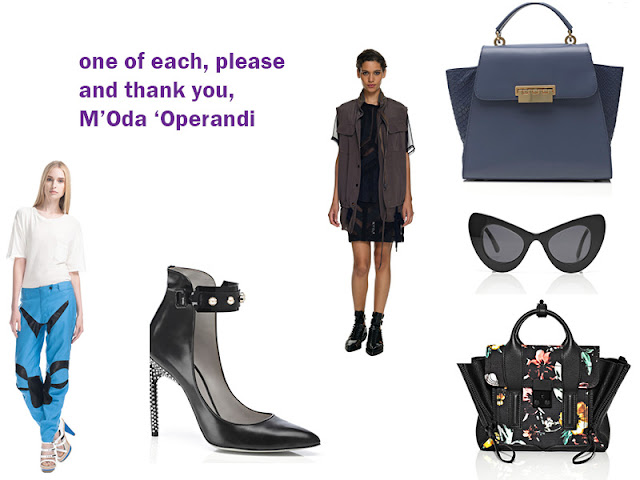